Here I am, getting ready to drive out for the day. I mean busy-highway drive, following printed directions to find someone’s house, the whole bit!

If you read here regularly you know I thought I’d never do this again, because of deteriorating eyesight, but if you’ve stopped by here lately you also know something weird and wonderful has happened to my eyes.

I’m seeing better now than I have for years. How this happened is a mystery! (But God works mysteries, now, doesn’t He?)

So, I’m drawn this morning to Isaiah. I’ve been reading and meditating lately in the sixth chapter of this wonderful book that I think could be called “Behold Your God!” And right now the 42nd chapter also speaks personal meaning for me. So, here today are reasons I see in those two beloved chapters,

REASONS TO PRAISE HIM 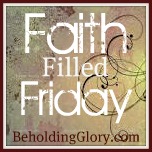 6 thoughts on “Praise Before Driving Out”