What’s next? After Christ’s Resurrection —  back then, right after it happened, and now, after its celebration — what’s the next step into the next new day, and week? Reviewing Sunday’s message, I get this answer:

First (and foremost) for them (back then), and us (right now): Grasp Resurrection’s reality. Really grasp it. Sink it deep enough to affect our lives.

The sunrise sermon cited three reactions to the empty tomb (in John 20:1- 9), then brought them down to now, to us, to the question: Like which do we respond?

1) Like Mary Magdalene? She didn’t even consider the possibility of resurrection. Her eyes saw and her humanity interpreted, the normal, flesh-like way:

His body’s gone! So someone took it!

How like that I am, too often! I see with fleshly eyes or hear with bodily ears, and jump to earthy conclusions — minus miracles.

Someone just wished me a “Miracle Monday.” Such great greeting for this post-“Easter” day! How good that I checked my email! Because till then miracles in my day didn’t even enter my head. Now I’m looking for the possibility, at least!

2) Next was Peter. To Mary’s words he responded running, right in character. And when he reached that dim-lit tomb, he strode right past his swifter but pausing fellow Disciple.

This text doesn’t tell his thoughts. Luke 24:12 says “he marveled.” Which implies he at least considered possibilities beyond mere body snatching.

But what mass of conflicting thoughts must have warred within him! On one hand, he would want to believe — strongly. But on the other loomed all the guilt and shame and wrenching grief of his betrayal.

Marveling, yet conflicted. Yes, I’ve been there, too.

3) Then there was gospel author John, speaking of Himself as one “Jesus loved.”

Rather than charge in, he “looked in” — more circumspect than Peter — “and,” he says, “he believed.”

Odd: it doesn’t elaborate, tell just what he believed. Maybe it wasn’t a “what,” a fact or possibility or set of such. Maybe believe here means what it does all through his first epistle, where that word echoes and re-echoes throughout, beginning to end.

There it means not just mental assent to some set of facts — but all-out, sold-out belief, even at the cost of everything else. Something you stake your eternity on.

Am I like that, or like Peter or Mary? I think I might consider the possibilities more than Mary, and look before leaping more than Peter, but the simplicity of faith that John displayed often comes hard to me.

I fear I’m too much like another disciple not mentioned here: “Doubting Thomas” — the give-me-concrete-proof kid!

Oh the grace with which God loves me and deals with my doubting! From my pre-Christian skepticism to present trial-and-disappointment times that I allow to make hopes look bleak!

I grieve at my littleness of faith.

So, for me the wait isn’t over, beyond Resurrection Day. I must continue the waiting on Him: for wisdom, for the next step, and for the faith with which to take it. I must take time again and again to sit with him, even pray my oft-repeated “I believe; help Thou my unbelief!”

Taking that step today, even as I “go fishing,” go about my normal business. Waiting on Him…

But looking for miracles, nonetheless!

Focusing on Him, by listing more REASONS, IN HIM, for me to praise and worship Him:

(My personal journal’s Reasons count has actually passed 500, but I’m picking up my numbering here from last !0,000 REASONS counting post.)

107- He will reconcile all things to Himself by Christ — whether things in heaven or on Earth (Col 1:20)

109 – He has now reconciled us who were alienated from Him and His enemies in our minds by wicked works (Col 1:21-22)

115 – This whole process makes it possible for everyone warned to be presented perfect in Christ Jesus (Col 1:28)

Linking up late (but better than never) to 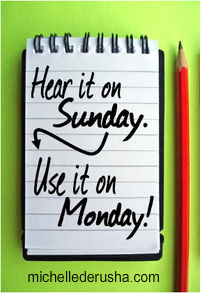 Hear it on Sunday, Use it on Monday